“Gopnik at the UN”: the Network has ridiculed the Russian Ambassador, obrusevshih British colleges 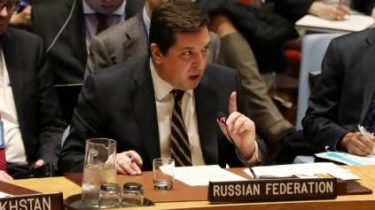 Deputy permanent representative of Russia to the UN Vladimir Safronkov taught “a lesson in diplomacy” during a debate on the situation in Syria. Turning to my colleague from the UK Matthew Reichrath, he switched to “you” and told to “not look away”.

“Are you afraid, lost sleep, that we will cooperate with the United States. You’re afraid of. All done to ensure that this interaction was undermined… Look at me, the eyes do not take you eye bends?” — Safronkov said, referring to Raycroft.

Social media users ridiculed the behavior of the Russian Ambassador. Someone calls it “the mugger”, and someone nostalgic of the days of the notorious Vitaly Churkin, calling it “the height of sanity” compared to Safrankova.

So this bully video it’s not photoshopped?! He really represents us in the UN?

What a shame we in the UN is…?

Well you simpleton handed back? – addressed the special representative of the Russian Federation to the UN to his British counterpart

You who is there representative in the UN appointed?? It’s a disgrace.https://t.co/TuyeVhccmE

@meduzaproject his cattle to breed, and not the UN to sit))

After this, in the eyes of the civilized world, Russia is once again adopted the country status Gopnik. What country, such and representative to the UN

New style of diplomacy of the Russian Federation. An excerpt from today’s speech of the Russian representative to the UN Safrankova. pic.twitter.com/5HJ047p9FA

We think, representative of Russia in UN restrained himself. In the original everything had to be so pic.twitter.com/bSpl3FOx9l

And they were lucky that the English pronoun “you” no. The Englishman is just idiocy by the manual ultrasonic inspection of hysteria in UN even could not understand.