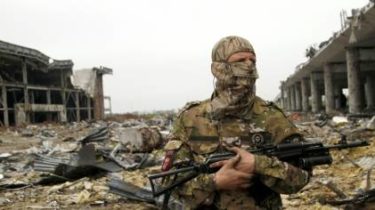 The Ukrainian side of the JCCC said that illegal armed groups ARDLE, ignoring the Minsk agreements, during the Easter holidays had committed armed provocations against the Ukrainian Armed Forces along the demarcation line.

Information about this reports the press center of Staff ATO.

“So, for April 16, has recorded 22 violations of the ceasefire by armed opposition groups including the use of prohibited weapons 13 mines of calibre of 120 mm, 7 min caliber 82 mm, AGS and small arms. Fire fighters carried out the positions of the Armed Forces of Ukraine, and also on areas near settlements Water, Ekaterinovka, Pavlopol and Gnutova”, — stated in the message

Also note that at the initiative of the Ukrainian side of the JCCC the “Silence” was wound up 33 times, which helped to avoid casualties among the civilian population.

“Such actions of illegal armed groups ORDO indicate gross violations of the Minsk agreements, deliberate planning and execution of armed provocations against the military personnel of Armed forces of Ukraine, and targeted action regarding further escalation of the conflict and the reluctance to observe the ceasefire regime”, — stated in the SCCC.