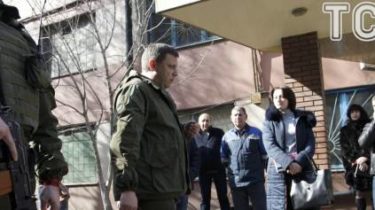 In the Main intelligence Directorate of the Ukrainian defense Ministry said the growth of social tension in the temporarily occupied territories of Donetsk and Lugansk regions.

This is stated in the message of the Gur in Facebook.

“There is a proliferation of calls for teams idle mines and their relatives to participate in the 10 a.m. April 19 at the rally on Lenin square in Donetsk on which you plan to claim the Chapter “DNR” Alexander Zakharchenko”, — stated in the message.

In Gur noted that urgent measures which intend to carry out in the occupied Donetsk, aimed at improving the welfare of the population.

“The motive for this action is the difficult economic situation of the local population, reduction of transfer to unpaid leave miners and inaction of the management of the mines on the payment of wage arrears,” — said in intelligence.

We will remind, on April 14 the leader of terrorists “DNR” Alexander Zakharchenko during a so-called direct line stated that ready to negotiate with President of Ukraine Petro Poroshenko. He allegedly asked about why he negotiated with the people’s Deputy Nadezhda Savchenko. “Dnrovets” in response said that he is ready to speak with Ukrainian guarantor.