Became known the details of the plan trump on Syria, which Tillerson suggested that Putin – the Associated Press 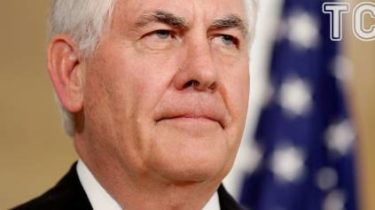 In the media leaked the details of the plan of U.S. President Donald trump on Syria, which Secretary of state Rex Tillerson suggested that the Russian leader Vladimir Putin.

Details of the plan, the Associated Press shared by us officials, who wished to remain anonymous.

The plan, according to sources, consists of several stages.

The three position plan – a victory over ISIS, the restoration of stability in Syria and the region, ensuring a political transition in which Assad eventually go away from power.

Despite the attack on the airbase Assad, trump is not seeking to use against him in the army. Also the US does not plan to increase ground troops in Syria. After winning or neutralizing the Islamic state, the administration of the tramp try to enter the local modes of the ceasefire between the army of Assad and various rebel factions, their in Washington called “intermediate zones of stability.” According to the plan of trump, the Assad government will be a participant in these “areas of stability” but because the coalition aircraft will conduct patrols without risk to deal with government aircraft.

Trump I hope that when security is restored, local leaders, who were forced to flee from Syria to return and lead local authorities. The basic idea is that Sunni security forces controlled areas with predominantly Sunni population, the Kurdish – Kurdish, and the like. Trump also hopes that Syria will be a transitional government, however, similar attempts have failed for many years.

Trust and history. In the state Department told me what he was talking about Putin and Tillerson in Moscow

Washington also hopes the same, remove Assad from power. For example, there is the option of holding elections in Syria in accordance with the new Constitution, which Assad will not be tolerated. Another option – Assad will repeat the fate of Saddam Hussein or Muammar Gaddafi. The third way is to use the war crimes his administration as leverage against the incumbent, but the trial of Assad difficult to implement from a legal and geopolitical reasons, because in addition to Russia, he is supported by Iran.

Washington does not rule out that Assad supporters may enjoy the option of a safe shelter for him somewhere outside of Syria, for example, in the same Iran or Russia. In fact the Secretary of state Rex Tillerson told Vladimir Putin and Sergei Lavrov, that Assad’s departure is the most convenient and “what next, more real.”

The final stage of trump’s life after the departure of Assad.

In the administration of the trump insist that Russia’s participation is crucial to the resolution of the conflict in Syria. Support of Putin want to, guaranteeing Russian access to its naval base in Tartus and air base in Latakia in any of Assad’s departure.

Highlights of this plan Tillerson voiced by Vladimir Putin, asking to declare the key conditions of Russia. According to anonymous officials, he did not demand an immediate answer and asked for a good think.

Recall that the Russian foreign Minister Sergei Lavrov called the talks in Moscow with his American colleague Rex Tillerson “deep and honest”.

According to Lavrov, the meeting discussed the situation in Syria and attack the United States. Lavrov urged an investigation into the incident. Also the head of the Russian foreign Ministry noted that Russia and the United States have a common interest in achieving a political solution to the Syrian crisis. According to Lavrov also discussed the joint fight against international terrorism.