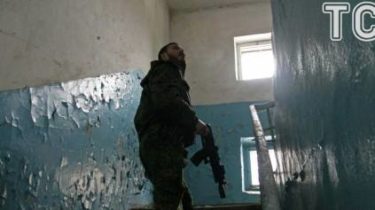 Militants continue provocative attacksfrom the beginning of the day, the enemy 18 times opened fire on strong points of the Ukrainian defenders.

The greatest number of attacks recorded on Donetsk direction. At positions near the Crimean enemy was using 82-mm mortars and strong points in areas of settlements Avdeevka and the heater was fired from grenade launchers of various systems and heavy machine guns. For Oborona Sands and Survey the enemy fired from guns of large caliber, and the defenders Zaytsevy used antitank grenade launchers and small arms.

On the seaside direction at the support points close to Krasnogorovka enemy hit with mortars caliber 82-mm anti-tank grenade launchers and heavy machine guns, grenade launchers led a provocative shelling of the Ukrainian positions near Starognatovka, and machine guns of large calibers used in the area of human settlements, Water and Chermalyk. Novotroitsk under active enemy snipers.

On Lugansk the direction from 82-millimetre mortars and automatic grenade launchers fired at enemy strong points near Katerinovka.

Two servicemen of the Armed Forces of Ukraine were injured.

Earlier, the Ukrainian side of the JCCC said that illegal armed groups ARDLE, ignoring the Minsk agreements, during the Easter holidays had committed armed provocations against the Ukrainian Armed Forces along the demarcation line.