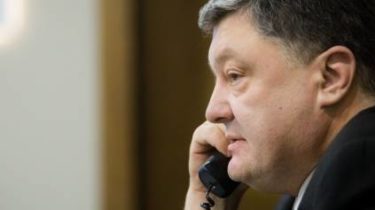 The President of Ukraine Petro Poroshenko in a telephone conversation with U.S. Secretary of state Rex Tillerson proposed to intensify negotiations on the placement in the Donbass international peacekeeping force under UN auspices.

The conversation took place after the death as a result of blasting of patrol on the occupied territory of Luhansk region American representative of the Special monitoring mission of the OSCE. Poroshenko condemned all forms of constant interference by militants in the work of the OSCE SMM.

“The interlocutors discussed the results of the telephone conversation in the Norman format April 18 and the results of the us-Russian talks in Moscow on 12 April. Petro Poroshenko expressed gratitude for the steadfast and immovable position of the US in support of our state based on the principle of “nothing about Ukraine without Ukraine”, – stated in the press service of the Bank.

And Poroshenko, and Tillerson is concerned about the dangerous development of the situation in the Donbas and stated the importance for Russia to fulfill the Minsk agreements, first of all, their security elements.

The Ukrainian President also called for the preservation of a United international front in the policy of sanctions against the Russian Federation to the complete restoration of the territorial integrity and sovereignty of Ukraine.

The sides discussed strengthening of strategic partnership between Ukraine and the USA, and the schedule of bilateral contacts, including at the highest level.