Godfather Putin Medvedchuk out of the darkness in Ukraine – Financial Times 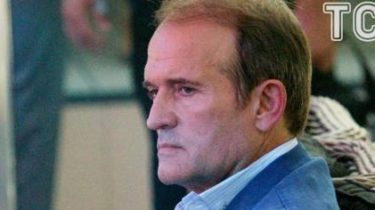 Victor Medvedchuk has an extremely strong godfather to his daughter – Vladimir Putin, President of Russia. Ukrainian is also under US sanctions for the “threat to peace, security, stability, independence and territorial integrity” of his country. Why Medvedchuk involved in negotiations about the future of Eastern Ukraine, which control the militants?

About it writes the Financial Times.

62-year-old Medvedchuk has long been in Ukraine a mysterious person that caused the contradiction. The head of administration of Ukrainian President Leonid Kuchma in the 2000s, Medvedchuk is fairly close to Putin that cause negative many in Kiev. He was photographed next to the Russian President on the martial arts tournament in Sochi on the Formula 1. In 2012, Putin visited the family of Medvedchuk at their Villa in Crimea, but the television showed, as they drink champagne.

Many suspect him that he is an agent of Putin. Yet Medvedchuk became the main intermediary between the current Pro-European government and Moscow – a potential way of completion of military confrontation, which began after the flight of Viktor Yanukovych in 2014, and the reaction of Russia, which annexed the Crimea and fueling the war in Eastern Ukraine. His role underlines the complex relations between the neighbors became enemies, and confusing motives and loyalty of many in the Ukrainian political elite.

If the world really will come to an end, an important role may be played by the offices of Medvedchuk in Kyiv, under the doors which, because of the hostility that ignited a politician inside of their own country, security guards, and the Windows are metal bars. 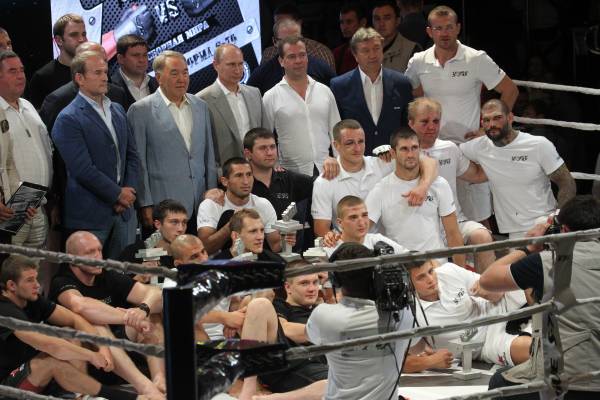 In his 90-minute interview with the Financial Times, which happens extremely infrequently, Medvedchuk calls “absurd” the criticism in his address that he secretly supposedly to protect Russian interests. “I can and I have a relationship with… Putin, because my relationship, in my vision, help the interests of Ukraine”, – he stated at the office of the Russian state TV channel. “I never hid such activities.”

Medvedchuk added that he has special permission to travel between Kiev and Moscow, but between States cancelled flights. Publicly Medvedchuk – the mediator in the liberation of hostages in the Minsk peace process in the East of Ukraine, the last document which was signed in February of 2015. Non-public people who are aware of the situation, saying that he participates in regular backroom negotiations between the two regions controlled by the separatists in the Donbass and rest of Ukraine.

Artemenko with Medvedchuk and co. before the publication of the “peace plan” flew to Moscow — Lyashko

Being a lawyer in the Soviet Ukraine, Medvedchuk became a Deputy after the country’s independence and met with Putin because of his parliamentary activities. As the head of Administration of President Kuchma from 2002 until 2005, he also established a close relationship with his counterpart in the Putin administration Dmitry Medvedev, who is now Prime Minister of Russia.

Whether Medvedchuk is a close friend of Putin? “It is better to ask the President,” he smiles. But his friends agree that Putin is the godfather of the youngest daughter of Medvedchuk Darya, and Medvedev’s wife is her godmother.

After the “Orange revolution” in 2005 Medvedchuk left politics to concentrate on business. But in 2013 his team from the organization “Ukrainian choice” lobbied that Yanukovych did not sign a planned Association agreement with the EU, pushing instead for closer economic ties with Russia.

Such actions helped Medvedchuk to be in the first list of sanctions by the USA against Russian and Ukrainian officials after Moscow annexed Crimea in 2014. However within a few weeks Medvedchuk acted as mediator for the Russian leaders of the separatists in Eastern Ukraine and the new Pro-Western government of Kiev, because, according to him, the separatists refused to talk directly with Kiev. The then acting President of Ukraine Oleksandr Turchynov had no choice but to accept his role, which was subsequently approved by the Chancellor of Germany Angela Merkel and Putin. 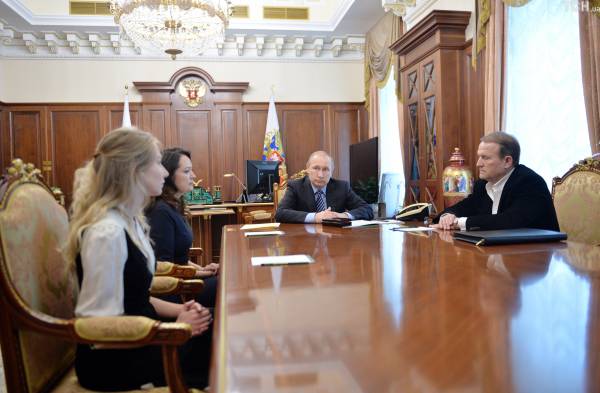 Medvedchuk recognizes that the Minsk agreements are on the line here, accusing both Moscow and Kiev in default. He believes that to break the deadlock is possible if the Ukrainian Parliament will adopt laws that will provide a limited autonomy to the regions held by the separatists, and they need to hold elections, if Russia will fulfill its Minsk commitments.

They include the withdrawal of Russian troops from the Donbass – whose presence Medvedchuk calls “controversial” – and the restoration of border control by the Ukrainian security forces. The resolution of the conflict, according to the Medvedchuk, can be even easier if the talk will include a big dispute between Moscow and Kiev – in particular, at the insistence of the Kremlin, that Ukraine should renounce NATO. “Ukraine does not need NATO,” he declares. “In the current situation, this will lead to the collapse of Ukraine… Ukraine should be guided by the interests of its development and not to join NATO and the EU. We are neither the one nor the need.” He insists that Ukraine must be “sovereign and independent” country, but its future in the restoration of relations with Russia.

“I am convinced, we are friendly countries, great neighbors. We were fraternal government, and we will in the future”, – said Medvedchuk. Whether he shares Putin’s statement that Ukrainians and Russians are one people? Medvedchuk considers this “discussion”. “I believe that we are two people, but the friendly and brotherly people.”