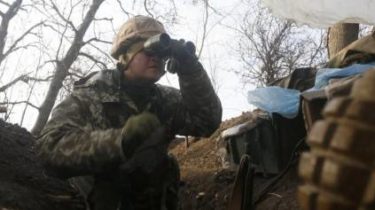 Since the beginning of the day, the enemy 23 times opened fire on strong points of the Armed forces of Ukraine.

The greatest number of attacks recorded in the coastal areas. So, mortars caliber 82-mm grenade launchers of various systems of small arms and the enemy were beaten at sea Photinia in the area of Water; with grenade launchers of various systems fired on Oboronna Shirokino and Novotroitsk, and heavy machine guns – the defenders Gotovogo. At the positions near Talakivka the enemy used small arms. Near Novotroitsk were active enemy sniper.

On Donetsk the direction with fire 82-millimetre mortars and anti-tank grenade launchers, the enemy covered the ATO forces positions near Avdeevka. The 82-mm mortars, the enemy used for Oborona mine Butovka. From guns large-caliber he was shooting at support points close to the Heater and Novgorod. In the area of Avdeevka acted enemy snipers.

On Lugansk the direction from automatic grenade launchers division of Russian occupation forces shelled strongholds close to Yellow, and from small arms – in the area of Valuyskiy. One serviceman of the Armed Forces of Ukraine were killed, another was injured.

Undermining the car of the OSCE in the Donbass: the militants removed the fake “withdrawal of Ukrainian DRG”