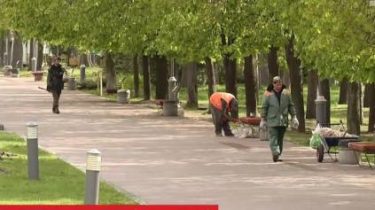 Capital Zelenstroy laments the theft of flowers and landscape stonewhich adorn Kiev to the Eurovision song contest. Petty thieves pull out beds everything you see and can pull, says the story TSN.19:30.

Particularly struck the public utilities grandfather with a baby carriage, which was taken from the Park rocks. Through the permanent theft of a decorative stone area in the Japanese it was replaced by pebbles. Since flowers are also the target of criminals, zelenstroevtsy to avoid the embarrassment on the opening day, growing spare. The territory of the contest will be 126 to decorate flower vases, which cost 200 thousand UAH. From foreigners, unlike private citizens, acts of vandalism do not expect.

Ukrainians the Kiev leadership calls not to destroy all that was created recently – at least until the end of the contest. And it’s not even motivated by concern about the beauty and reputation of the city and the country, which should be close to each inhabitant of the capital.