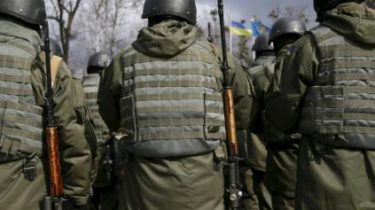 Three Ukrainian soldiers were killed and six were injured in the East during the day. The journalists managed to learn the names of the victims, according to a story TSN.19:30.

It 41-the summer senior Sergeant Sergey Kobchenko, who died from shrapnel wounds during the attack near Avdiivka industrial area. In the Sands of the deadly wound in the head received a 29-year-old cherkaschanin Vasily Shevchenko. Basil was a sniper assault battalion. Another victim – commander of the Department, 23-year-old Ivan Miller from Khmelnytsky. It is known that a sniper hit the guy when he was on duty.

As reported, the fighters fire on positions of ATO forces along the demarcation line. For Tuesday, April 25, in the area of ATO in the Donbas the militants have increased the number of attacks compared to previous days by half to 65. Three Ukrainian soldiers were killed, four more injured.