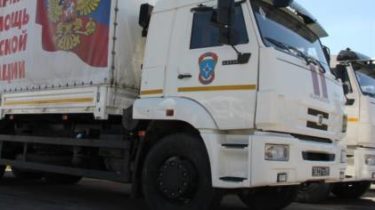 In the occupied part of the territory of Donbass was invaded by regular Russian trucks with “humanitarian convoy”.

As noted, the move “humanitarian” convoy again took place with gross violations of international and domestic legislation and consistent with International Committee of the red cross modalities.

The guards stressed that the Ukrainian interdepartmental group has conducted only a visual observation without performing control functions.

According to the Russian EMERCOM, the trucks were allegedly carrying baby food, one car was with medication.

“The special feature of this load is the discrepancy between the number of trucks stated in the previous note, the Russian Federation. And the car with the medication was filled only 10%”, – noted in state frontier service of Ukraine.

Note, now “humulone” has already arrived to the destination in the Luhansk and Donetsk regions, where it continues unloading 400 tons of Russian “assistance”.

Recall, on the eve , the militants fired at Maryinka with mortars, infantry fighting vehicles and rocket-propelled grenades. The separatists continue to bombard residential neighborhoods.