The midst of preparations for the “Eurovision” song contest: Kiev sneer on the benches on Kreschatik and enjoy the Arch of Friendship of Peoples 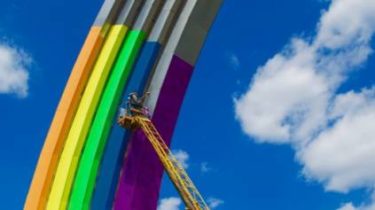 The movement in the centre of Kiev was blocked for three weeks, and on Khreshchatyk began the installation of “village” under the final of song contest “Eurovision”. Fan zone with places for rest and entertainments will occupy 13 thousand square meters, said in the story TSN.16:45.

Her scenes with the guests of the show will be entertained by the singers, and the competition can be watched on four large television screens. The entrance to the “village” will be free and the installation will be completed by the opening of the fan zone may 4. Now the territory was blocked by a fence and secured by the police. Not without its oddities: cut off from the people of Kiev were also benches on Kreschatik. Passers-by reacted to it with humor, and the organizers of the song celebration apologized for the mistake and promised to fix it soon.

Residents of the capital also actively comment on the reincarnation of the Arch of Friendship of Peoples, which the utility zakleivayut special paper in the colors of the rainbow. Most of the respondents TSN passers-by like change – people think it appropriate to convert design into an art object, and from time to time to change its appearance. However, there are those who saw in the symbol of joy and spring and debauchery. Supposedly, the arch will become the end point of a gay parade and a symbol of sexual perversion. Because of this, the activists even blocked work on Thursday evening.