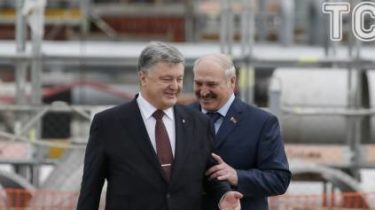 About this Poroshenko said today, April 28, during the transfer of military equipment of the State border service of Ukraine, reports BBC Ukraine.

From engineering to electricity: Poroshenko and Lukashenko have agreed about expansion of markets

“I got solid reassurance that the planned Russian-Belarusian strategic exercises “West-2017″near the border of Ukraine will not turn on preparation of the Russian bridgehead for the invasion of Ukraine from the Belarusian territory,” – said the head of state.

In addition, Poroshenko said that he agreed with his Belarusian counterpart on completion of demarcation of the Ukrainian-Belarusian border in the near future.

We will remind, on the anniversary of the accident at the Chernobyl NPP, President of Ukraine Petro Poroshenko met with his Belarusian counterpart Alexander Lukashenko stated about the friendship between the two countries.