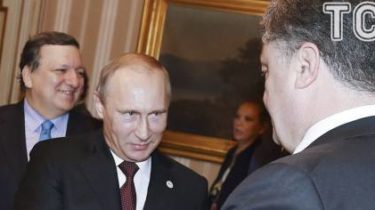 Press Secretary of the Russian President Dmitry Peskov commented on the alleged conversation between Vladimir Putin and President of Ukraine Petro Poroshenko.

A Kremlin spokesman said that spends a lot of working activities, which are not according to his press service.

“The President of Russia on a daily basis performs a variety of contacts with international lines, including with the heads of other States. Not all of them are subject to the relevant press services, as well as the overall events of the work schedule of the President includes a much larger number of meetings, contacts. Not all we report to the air or to the information Agency” – leads TASS his words.

A direct answer to the question of whether there was conversation with Poroshenko, Peskov gave.

We will remind, earlier the Russian newspaper “Kommersant” with reference to sources in Moscow and Kiev reported about a telephone conversation between Putin and Poroshenko, the content of which allegedly decided not to publish.

At the same time, the Administration of the President of Ukraine denied the conversation.

“The only conversation in April was held on 18 April in the channel format notified in a joint press release, four press-services”, – stated in the AP.