In Kiev McDonald’s visitor killed a man with one blow 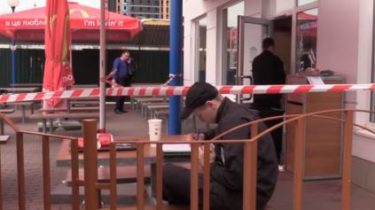 In a fast food establishment McDonald’s near the metro station “Minsk” in Kiev, the visitor killed the man.

About it reports a press-service of the main Directorate of the National police in the capital.

Published by law enforcement personnel is seen as a customer of fast food a man came up. They exchanged a few words, and one hit another in the head. The opponent fell to the ground. It was later revealed that he died due to traumatic brain injury. The incident occurred on April 29, however, the video only released on 3 may.

On the Left Bank in Kiev there was a double murder

“The victim was approached by an unknown and made a comment that he smoked in the wrong place and arguing with passersby. As a result, between strangers occurred verbal conflict, during which a wanted person was hit in the face of the deceased and he fell on the asphalt,” – said the press service of the police.

Militiamen opened criminal proceedings under article 119 part 1 of the Criminal code of Ukraine (murder on imprudence). Sanction provides from 3 to 5 years of restriction of liberty or imprisonment for the same term.

Currently the attacker is being sought.

We will remind, earlier in Kiev, Obolon has been a terrible murder. The unknown man stabbed the woman and dragged her body into the street. Witnesses of the terrible accident became the janitor and the neighbors of the deceased.