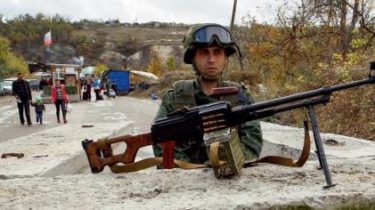 The militants “LNR” was beaten to death 38-year-old resident of the Village Lugansk during the “explanatory talks”.

It is reported by the police of the Luhansk region that has received the father of the deceased.

Deceased was earning his living by that for a small fee, helped carry bags to people crossing PPC “Stanitsa Lugansk” from the checkpoint on the Ukraine-controlled territory to the separatists ‘ checkpoint. On April 27, the man once again took the things and never returned.

In Lugansk prepared to send home a party of Russians killed

The relatives began the search for the missing and after some time his younger brother found in the social networks of the announcement that outside the University occupied Lugansk found the body of an unknown man. The description of the deceased and his belongings relatives to identify the missing.

He went to Lugansk, identified the body of his son in the morgue and took it home. In the help which the father gave to the morgue, it is noted that his son had died “from multiple blunt force trauma to the head, torso and extremities, and fracture bones and damage internal organs.”

Returning with the body of his son to the Village Lugansk, the man immediately called the police.

During carrying out expeditious actions, militiamen have received the operative information that on 27 April, the militants at the checkpoint detained the man and took him to the so-called “commander” Lugansk. With the detainee was conducted “explanatory conversation”, during which he died. Later, the separatists have taken the body and thrown outside the University.

Recall, according to Ukrainian intelligence, the Donbas militants threw a bottle with Molotov cocktails in the dugout, after a quarrel with his comrades in the service”.