In Kiev honored the memory of the legendary “Bati”, who created the first full battalion to ATO 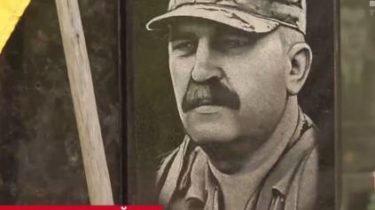 The third day of birth of the 11th battalion “Kyivska Rus” celebrated the veterans that defended the mountain Karachun near Slavyansk, Debaltsevo and the surrounding area of Donetsk airport. ATU soldiers went to the Lukyanovka cemetery, where he opened a monument to the founder and commander of the unit Alexander Humeniuk, says the story TSN.19:30.

The commander, who gathered near themselves patriots, died in the summer of 2014, but managed to complete before his unit in the beginning of the war, this was incredible. Military remember that he has provided them with armored vehicles, mortars, and cover. “The man took full responsibility for the lives of children, he created the battalion” – says “dad” volunteer Edward Malowniczy.

Now the battalion on the break and preparing for new trips to the front. There was consecrated the flag. Meanwhile, on the website of the President created a petition on assignment of the deceased commander of the title of Hero of Ukraine. Three sons, with whom legitimately could be a battalion, know what an honor. “For the time commanded, there was no loss. He had opportunities to go abroad, offered the French Legion of peacekeeping – did not go, left to defend the country. He knew what they were doing, and went,” they say.