The OSCE mission in Donbass: another attacks and restrict access 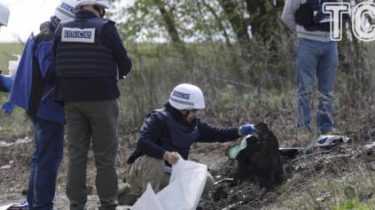 After the death in the Donbass citizen of the United States from the composition of the observation mission of the OSCE two weeks ago, other observers continue to be in danger, intimidation and restriction of activity by Pro-Russian forces.

This was stated by attorneys temporarily in the Affairs of the U.S. mission to the OSCE Kate Byrnes writes UKRINFORM.

“Over the past week, the life of the SMM monitors were again in serious danger. So, on April 28, an explosion occurred in the air at a distance of from 50 to 100 meters from the position of the CMM near the contact line in the zone in Luhansk, which is controlled by Russian-led separatist forces,” – said the representative of the United States.

The same day, in the village of Steep Mountain, occupied by Pro-Russian forces, observers recorded breaks of bullets in the 50-meters from their place of residence. Shots were fired from the positions of the so-called “LNR”.

Burns said that such incidents are unacceptable, and all forces should immediately take measures to ensure the security of the staff of the observation mission.

Also, according to her, only last week a joint Russian-separatist forces have restricted the access to the observation mission 13 times.

The U.S. representative said that Russia refused to support a statement regarding the conviction of attempted harassment or intimidation of observers SMM, as well as provide them access on all territory of Ukraine without interference.

Also the explosion was shell-shocked citizen of Germany IVA Hneln. She was taken to a hospital in Lugansk, where she was provided medical assistance.