Ten wounded soldiers during the day. The situation in the ATO zone 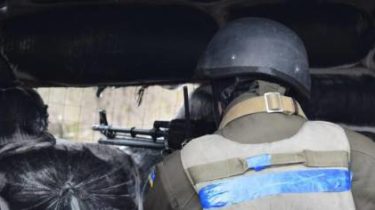 For the past day the terrorists in the Donbas 58 times opened fire on strong points APU fighters.

The OSCE mission in Donbass: another attacks and restrict access

At the direction of Lugansk from artillery of caliber 152-mm, 82-mm mortars, APCS, grenade launchers and heavy machine guns the rebels were beaten at positions near krymske. Artillery systems of calibre of 122 mm and mortars of calibres of 120 mm was used for fighters in Popasnaya, and 82-millimeter mortars, rocket-propelled grenades of various systems and machine guns of large calibers in Novozvanivka. From grenade launchers and small arms terrorists fired at positions near Lobachiova technology.

On the seaside direction from mortars 120-mm and 82-mm, APCS, grenade launchers of various systems and large-caliber machine guns, the terrorists fired on positions near Pavlopol. 82-mm mortars, grenade launchers, heavy machine guns and small arms were used at positions near Gotovogo and Krasnogorovka. From 82-mm mortars, weapons, infantry fighting vehicles, rocket-propelled grenades of different systems and small arms terrorists fired at strong points near Marinka. From small arms, machine guns and large-caliber anti-tank grenade launchers beat on the strong points of Marines in the area of Water. From small arms fighters fired in Novoselivka Druha, Bohdanivka and Shirokino.

Over the past day, ten members of the Armed Forces of Ukraine were injured.

Earlier it was reported that fighters “DNR” began to form “Azov flotilla”. The terrorists initially included in its composition 5 fishing boats and pleasure boats which were called “battle boats”, then “combat composition of the fleet” was brought to 7 such “combat units “, locations were determined of Novoazovsk (“main base”), Sedov and Nameless.