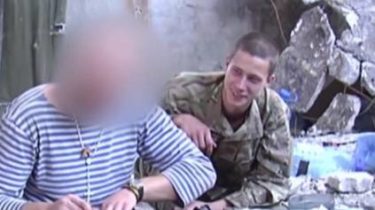 In the river took place the farewell ceremony for the three soldiers of the 43rd separate infantry battalion, who died may 1 at the arc Svetlodarsk.

Anatoly Bizhko, Sergey Smirnov, and Yuri Malkov went to rescue a wounded comrade and was ambushed terrorists. After the death of the militants did not give the bodies of our children for five days. On the weekends they managed to take to the Dnieper. Here with the soldiers parted the twin cities and volunteers. Bury each of the dead today in their home towns: the youngest, 22-year-old BigCo, in Nikopol, 36-year-old Smirnov in Kherson, and five years younger Malkova – in Kryvyi Rih.

The first commander of the 43-th separate mechanized infantry battalion Alexander Vodolazsky said that the soldiers went to the aid of wounded military, to carry him from the battlefield in ambush was waiting for them by the militants.

“They died heroically, firing… the Separatists did not give five days. Humanly impossible to explain, the separatists traded, wanted something to negotiate,” – said the military.

Earlier it was reported that the terrorists were going to use the body of fighters for propaganda and hold them accountable for undermining the car of the OSCE.