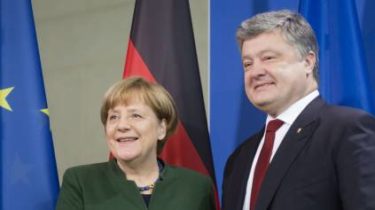 President of Ukraine Petro Poroshenko on the phone spoke with Federal Chancellor of Germany Angela Merkel.

The interlocutors noted the memory of those killed in the Second world war. Merkel noted the role of Ukrainians in the fight against Nazism. Also, the two leaders discussed the situation in Donbas, stressing the importance of implementing a secure component of the Minsk agreements and liberate hostages.

The President of Ukraine stressed the inadmissibility of holding any demonstrations of the technique under the guise of “parades” in the occupied territories on 9 may.

Petro Poroshenko and Angela Merkel also condemned the attacks on representatives of the OSCE and systemic obstacles in their work. They talked about carrying out investigate and punish those responsible for the attack on a patrol of the OSCE 23 April.

Tuck argues that the worsening situation in the ATO is not associated with the negotiations, Merkel and Putin

The Chancellor told the President of Ukraine about the results of their talks in Russia on 2 may. The head of Ukraine and Germany stressed the need to continue work in the “channel format”, in particular, with the participation of the newly elected President of France.

They also agreed on the further schedule of bilateral meetings.