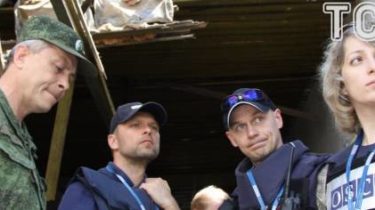 Head of the Special OSCE monitoring mission in Ukraine Ertugrul Apakan, condemned sexual harassment by armed militants “DNR” to the member of the SMM patrol, the press service of the mission.

“With all the participating States of the OSCE SMM condemns all forms of violence against women,” – said Apakan.

According to him, during the incident, which occurred on may 5, armed with a gun a man threatened an unarmed employee of the mission, using comments of a sexual nature. The OSCE call for immediate and unequivocal reaction of the so-called “Donetsk national Republic”.

Also Apakan called upon to identify the perpetrator and to take steps to ensure that such situations do not happen again.

“Participating States of the OSCE instructed the naked men and women the SMM to perform hard work and they have the right to do so without fear of physical or verbal assault,” – said the head of SMM OSCE in Ukraine.

He stressed that the mission will not tolerate the attempts of intimidation, humiliation or interference with the work of employees. OSCE SMM also once again urged the SCCC to ensure that all possible measures to prevent similar incidents in the future.