Photo of my grandfather, it burnt down in the Elevator. The Network has ridiculed the March Zakharchenko with a portrait of the “Motorola” 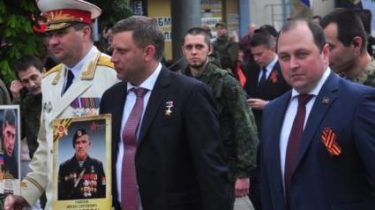 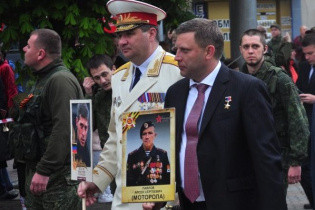 Social media users laugh at the leader “DNR” Alexander Zakharchenko, who during the March of “Immortal regiment” took to the streets of Donetsk with a portrait of the slain militants “Motorola”.

According to the idea of the rally, the protesters should carry portraits of their relatives who died during the Second world war. However, the main action took a walk around the streets with a portrait of the slain terrorist Arsen Pavlov, and next to him was carrying a photo of Mikhail Tolstykh, known as “Givi”.

Nick remembered the main fighter of the Donetsk region the reservation that his grandmother during the great Patriotic war supposedly was in a concentration camp “Reykjavik” and laughed that the campaign he came out with a portrait of his grandfather, which burned down in the Elevator. Noticed users on parade by Russian singer Julia Chicherin, known for its support of militants in the Donbas.

Who has not seen the Givi with Motorola on a stick, please) pic.twitter.com/pE9j05GaMe

#DNR #Donetsk #bessmertnyy Zakharchenko has not found pictures of his “28 fought in the second world war the family”-carried snout Motorola. And the armor under his shirt pic.twitter.com/uflr0Tomai

Terrorist Zakharchenko with a portrait of his grandfather burned down in the Elevator. Portrait of a grandmother from a concentration camp in Reykjavik has not survived. pic.twitter.com/4OVfZEVFnS

Zachary and his great-grandmother #chronicum pic.twitter.com/WTB1yphoRt

You serve as a table decoration, you like a fish with beer, served #salaho #Chicherin pic.twitter.com/RWknFscKR7

Recall that on 9 may the militants of the so-called “DNR” and “LNR” have staged parades of military equipment. In the temporarily occupied Donetsk and Luhansk brought the Soviet tanks with the inscription “victory” and held marches with Soviet symbols.