The day of memory and reconciliation in the area of the ATO in Bahmut, remembered how the military helped in the siege of the militants 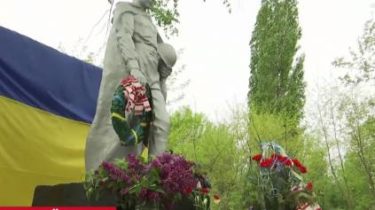 A Day of remembrance and reconciliation the people of Donbass remembered not only the victims of world war II, but war veterans today. And at the front the enemy continued to shell Ukrainian positions, says the story TSN.19:30.

In Bahmut people came to the place where was the camp “Infirmary”, where harsh conditions were abandoned Soviet prisoners of war. There are 49 graves buried almost three thousand victims of the war. This place was afterwards part of the military, which during the occupation failed to capture the Pro-Russian terrorists. The defense of the object held by the legendary 3-rd regiment of special forces. Locals say that want to build a memorial to the victims of the previous war, but also remember about the recent events, because they are trying to help in the military. “We helped the children who were sitting in the environment, no eating, no drinking. We told them: guys, if something serious- then through the gate, boiler room run out to us, we hide, we have a cellar. But thank God,” said local resident, Evgeni Ananchenko.