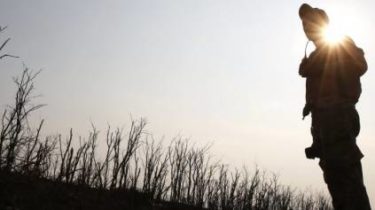 On Tuesday, may 9, in the shelling of the positions of one of mechanised brigades killed a soldier.

“Today, may 9, as a result of shelling of the positions of one of mechanised brigades, the staff which carries out fighting tasks in the direction of Donetsk, near Lugansk, killed a soldier of one of divisions”, – is spoken in the message.

In the press center of the ATO headquarters noted that the positions of the Ukrainian defenders, the enemy was shooting from small arms.

With the beginning of the day in different directions along the demarcation line fixed in the use of enemy small arms, heavy machine guns, grenade launchers of various systems, mortars of caliber of 120 mm and 82-mm armament.

Recall that over the past day , one soldier of the Armed Forces of Ukraine were killed, nine more Ukrainian defenders was injured. Terrorists in the East of Ukraine 50 times opened fire on strong points of the Ukrainian troops.