One man show is over and the fight against “political animals.” Farewell message Gontareva 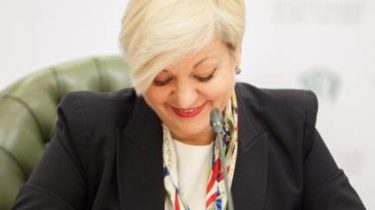 Today, may 10, at the head of the National Bank of Ukraine Valeria Gontareva last working day in this position. Tomorrow she goes in long vacation, until it will dismiss the Supreme Rada. The corresponding statement she wrote a month ago and handed over to the President. The acting head of the NBU will be the first Deputy Gontareva Yakov Smoliy.

“Today is my last day of work in the National Bank, so I want to say goodbye and thank everyone who supported this hard way of reforming the financial and banking system of our country. Many people to whom I am grateful, I have never seen: I can only guess who in late 2014 launched the project Save Gontareva, which appeared more than 1000 likes in the sea of universal hatred. I never knew the name of the person who in the midst of war and the physical destruction of our industry in the East wrote: “Gontareva guilty in the fall of the hryvnia is not more than the stewardess in the plane crash,” wrote Gontareva in the column for “New age”.

Convinced that resigning for personal and not political reasons.

“The change of the head of the NBU – not a political decision, and my personal choice. For the first time in the history of the national Bank, this decision does not concern politics. And it proves once again that the country has changed in favor of true democratic values. Three years, I have tirelessly fought for the real independence of the National Bank. After all, the independence of the NBU and is the basis of financial and price stability in the country, the Foundation to build not only the best of the European Central Bank and market economy as a whole”, – said Gontareva.

She remembered what were the economy and the banking system three years ago, when I came to post, and how things have changed during this time. Boasted their successes and their team.

“We are in a moment lost in the Donbass, and 15% of our GDP and 30% of foreign exchange earnings. We have stopped the enterprise, and the infrastructure was completely destroyed. The balance of payments is simply “torn to pieces” and the exchange rate, which is the mirror of the balance of payments, and responded accordingly. Not to mention those chronic, incompatible with life imbalances in all sectors of the domestic economy and banking system that have accumulated over 20 years of simulation of real reform. It and empty the government’s Treasury account, and the 100 billion dollar hole in the “Naftogaz”, and a huge number of terminally ill banks”, – says the head of the NBU.

Said that “only thanks to the international community, through the IMF, world Bank, EBRD, European Union and American government, we were able to survive and to stabilize the macroeconomic situation in the country. But all this we could not do without stabilization of the budget and the reforms in the energy sector.”

Gontareva convinced that fulfilled all the tasks set before him.

“The country moved to a flexible exchange rate and the beginning of the new monetary policy of inflation targeting. We cleared the banking system from insolvent banks and strengthened its sustainability. Moreover, a full conversion of national Bank into a powerful modern institution, rebuilding all internal processes. However, if my successor thinks that now he will not do, let’s not upset because of the tasks for the new head is more than enough,” – emphasizes Gontareva.

It transmits to his successor launched the final stage of purification and reform of the banking sector, the project regarding the recovery of lending, the project work with troubled assets, a huge comprehensive project cashless economy (the transition to electronic payments and the phasing out of cash), the draft of the new foreign exchange regulation, infrastructure and instruments of the capital market and many more.

“I also ask his successor as soon as possible to begin to implement jointly with the Finance Ministry a new strategy for state banks. This is a definite priority for this 2017. Clear development strategy of the state banks, healthy competition and good corporate governance is the key to the success of the banking sector of our country for years to come. Do not forget about the non-banking sector, which should “go under the wing” of the National Bank and also requires significant reforms. Before the new head of the National Bank, there are enormous challenges”, says Gontareva.

Gontareva settled in Washington in a room for $ 400. and threatened the journalists by the police

She is convinced that “at the head of the NBU must be professional unbiased banker-technocrat. This person should understand how a Bank works, why there are concepts of capital, liquidity, Basel why write all these prudential rules for the banking sector”.

Gontareva has boasted his team in the national Bank, and some politicians called “animal”.

“On Board a modern ship named “NBU” new professional team of reformers and macroeconomic sea for two years more relaxed. But this does not mean that it is easy. In a country where there is no justice, where “political animals” bite each other to the blood, where those who want to change for the better, almost every day to throw mud on all TV channels and they carry the coffins under the Central entrance, it is necessary to have a fair amount of fortitude and willpower. Therefore, the main Council – not to lose a new team of NBU, hold fast to our 500 Spartans”.

The national Bank of Ukraine is guided by the updated law on their activities “stipulates the independence of the Central Bank at the legislative level, fully institutionally structured organization with fully functioning oversight committees, the credit Committee, the financial policy Committee, the monetary policy Committee, the Committee of process management and the like. Now our foreign partners to put the transformation of the NBU as an example to other countries and sent to us for training of employees of the Central banks of other countries that are developing. This new structure of the NBU – the real basis of independence. Now nobody will be able to take in Bank the decision alone. One man show is over forever.”

The new head of the regulator will have to fight with people’s deputies-populists who are trying to rewrite the law “On the National Bank of Ukraine”.

“Remained the most important front – the fight against MPs-populists who are trying to rewrite the law “On the National Bank of Ukraine”. Fighting against the ignorant functionaries and pseudoacademic who knowingly or unknowingly play along with politicians-populists. Recently, my colleagues centralbanker said that the Central banks are the white knights. They start reforms with the establishment of macro-financial stability and purification market, and then on this Foundation begins to grow new country. Believe it!” – said Gontareva.