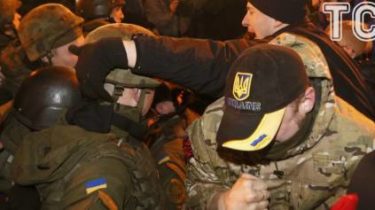 A picket and a crush near the Ministry of internal Affairs of Ukraine gave the representatives of the movement of Ukrainian nationalists. The walls of the office they came with a demand to explain why may 9, the police broke the door of their office and detained two dozen activists, says the story TSN.19:30.

Then the cops gave the nationalists to enter the campaign, and locked in the room, the activists threw flares, glass bottles and vegetables in participants of the March of so-called “immortal regiment”. Then pulled the tube of a rocket launcher and he was aiming at the crowd. The police broke into the office of the OUN and detained all who were there.