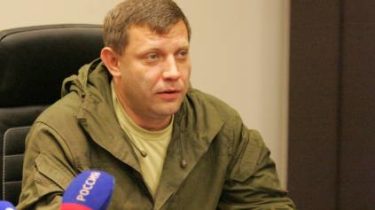 The parents of the leader of the Donetsk terrorists Alexander Zakharchenko live on the territory controlled by Ukraine and receive pensions.

This was reported by Minister of social policy of Ukraine Andriy Reva in comments to television channel “112 Ukraine”.

“Parents Zakharchenko live on the territory controlled by Ukraine. They are internally displaced, they are entitled to a pension, they get it, despite the fact that they have a son a bastard. About Carpenter, he is a war pensioner, the pension is not paid to him, although he has a right to it, let him come to us and issued, after you talk to the security authorities,” – said the Minister.

In the Donbas on the road explosions before driving through Zakharchenko

We will remind, earlier in an interview “Цензор.net” the Minister of social policy said, “Now parents Zakharchenko receive a pension in our territory. Their son is there is a President called (in the house №6 all Napoleon and presidents), and they somehow “novorosskie” Paradise don’t go.”