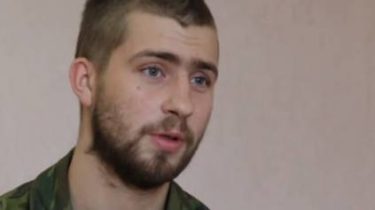 22-year-old boy told about the “dissatisfaction with conditions of service in the ATO” and “drunkenness” of Ukrainian soldiers.

The next day, may 12, in the video reacted in the headquarters of the ATO, and publicized the statement, stating that at the end of March of this year, Taras Gapac voluntarily left the place of service, and the fighter was stripped of the title “Sergeant” after a careful study of the details of the incident.

In the meantime, the materials have transferred in military office of public Prosecutor will solve a question on the article of the criminal code for voluntary surrender.

Meanwhile, TSN.ia contacted friends, former and current colleagues of Taras Hapaka to find out if he could actually voluntarily surrender into the hands of militants.

A 10-minute partially assembled video Gapac says that he hails from the city of Borislav of Lviv region, he began his service in the “24 brigade” under contract in November 2016, after which I got my training at the Yavoriv ground (Lviv region).

“There we were taught Ukrainian and American instructors of the art of warfare, weapons. Two months later, I came to the part I was sent into the zone ATO”, — he said.

Gapak said that a few times a week and traveled to BMP-2 and “worked towards “Enrosca military.”

“By the 17th brigade could hear the sound of how mortars work. The officers for not paying attention. When the guys opened fire (on the order of an officer or at their own discretion)… Often took alcoholic drinks,” — said in a video Gapac several times haltingly.

The fighter says in the video, twice, three times a week, the Ukrainian military had used alcohol. To question an unknown person about whether they had the weapons, Geplac responded favorably and said that the officers did not pay attention.

“Bringing the number 23 (March — ed.) after the consumption of alcoholic beverages, I had a conflict with the guys and then I took it and went in the direction of “Cossacks.” They were arrested and brought here,” said Hapac again haltingly.

Answering a question from an unknown person, a soldier said that the soldiers in the ATO serve for a long time, more than a year or two, while many desire to be at the front disappeared, “many do not understand why they are there.” Gapac added that his salary was about 14 thousand UAH. On the question of whether he went into the service just for the money, the fighter replied: “it Turns out that way.”

Taras also said “the lack of military equipment and personnel, a constant drinking of alcoholic beverages by personnel, and that soldiers are trying by any means to obtain a dismissal or release”.

WHAT THEY SAY ABOUT LAPLACE HIS FRIENDS

TSN.ia wrote to several friends of Taras Hapaka, which is in the list of his “friends” in the social network Vkontakte, all of them shared information about Taras on condition of anonymity.

As noted by some friends in the video Gapak said not all of his service. Two friends (former and current partners) have confirmed that service Taras began in 2013 as a draftee and was on the Yavoriv training ground in Lviv. In 2014, he was transferred to a contract held joint exercises of the armed forces and NATO, and indeed was part of the 24th OMBR. But on the testimony of acquaintances differ.

Some say that Gapac was transferred to the ATO at the end of the summer of 2016, others claim that he served in the ATO from the first season of 2014.

In recent times, according to one colleague, Geplak was near Popasna, Luhansk region, from where “caught” in the hands of the militants. In December 2016 Gapac was one of the strongholds in the area of ATO.

Disagree and the testimony of acquaintances concerning statements of Guapiacu in the video: some believe that the militants were forced to speak the truth, others confirm that the APU on, everything was perfect.

The reasons for “surrender”

One of the friends of Taras, who had met him last time in the summer of 2016, stated that the fighter “burned” by service in the armed forces.

But the girl who last spoke with Gaiacom this year in February, has said that he did not want to serve.

Two companions of Hapaka service said that at the time of his disappearance, they were in hospitals with injuries, so personally, I don’t know what happened to Gaiacom. However, one of them suggested that Taras could “sort out” with alcohol and to “go to battle” with the insurgents.

The same soldier noted that the behavior of the Taras could be the result of tension among the military: according to him, in the last year their battalion for a year did not go from the front, it was not rotation.

At the same time, none of the friends expressed the belief that Gapac voluntarily surrendered to the militants, stressing that it is always Taras was a patriot. Comrades of Paplaka for military service in ATO also talk about his former devotion to the Motherland.