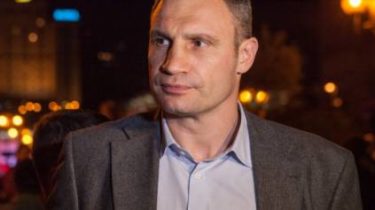 Mayor of Kiev Vitali Klitschko before the Eurovision final today, Saturday, may 13, gave a press conference at the IEC, which, in particular, told about spent the contest money.

This is stated in the message on the page of the mayor in Facebook.

“I know that now there are questions about money spent. The Prime Minister voiced it. I want to reiterate that the city has committed itself to transfer 200 million UAH to the organizers who should be responsible for how these funds are spent”, — said Klitschko.

He also noted that in the key of preparation for the Eurovision song contest in the capital was responsible for the infrastructure and restore order in the city. “We fully complied. I can say that I am pleased with how things are going. I want to thank everyone who invested their time and energy to this celebration,”.

“The people who live on the left Bank, a very positive view of how we repaired the area. And how did the streets around the IEC. What was and what is today — two big differences. I personally checked and repair of the subway, and landscaping, and I have no questions. All done at the highest level. Our utilities worked 24 hours a day,” said the mayor.

In addition, Klitschko expressed hope that all who visited Kiev, will be back in town again.

According to the mayor, for the competition arrived in Kiev about 20 thousand foreign guests among which participants and members of official delegations. In addition, over 40 thousand Ukrainian tourists came to the capital in the event of the competition. For all shows of the Eurovision song contest has sold over 60 thousand tickets. Profilic — main fan-zone — in these days was visited by about 350 thousand people.

“We understand that safety during such events is important. Law and order in Kyiv during the competition to ensure more than 10 thousand law enforcement officers. 3.5 thousand here in the district finals today,” — said Klitschko.

The mayor also stressed that Eurovision-2017 will go down in history as competition.

“In Kiev was the longest red carpet — 265 meters. The Largest Profilic. He, by the way, just under the Windows of city hall on Khreshchatyk. And I was forced to listen to the music, — said Klitschko. Also for the first time in the history of the Eurovision song contest live during the semifinals one of the participants is a singer from Macedonia — received a proposal of marriage. This has not happened!” he added.

“I hope that today’s finale will be an unforgettable positive emotions. And all who visited Kiev will come back here again. With family, with friends. And to tell the house what a beautiful and welcoming our city is a friendly country – Ukraine”, — said Klitschko.

“We’ll open the track. Which is one of the best in Europe. Park “Natalka” is a very good recreation area on the banks of the Dnieper. And there will be more interesting, what there is to see! Because Kyiv is a European capital city which has something to impress and delight. And guests we are always waiting for!” — summed up the Klitschko.

Recall President of Ukraine Petro Poroshenko canceled his visit to the Eurovision final in connection with the tragedy in the town. As you know, the militants opened fire on the private sector, from shrapnel wounds on the spot, four people were killed, another hospitalized in serious condition.