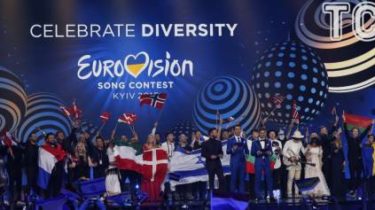 Today, may 13, during the Grand final of “Eurovision-2017“, in the IEC on the Left Bank there will arrive personally the President of Ukraine Petro Poroshenko.

The final of “Eurovision”: the bookies have changed the favourites, and Jamala and Ruslana are preparing to present new songs

According to the journalist of TSN, the President will be watching the championship final of the music in the hall with the ATO soldiers who were being taken from the hospital in the IEC.

The final of “Eurovision-2017”: the order of participants ‘ performances and how to vote Ukrainians

Recall that the final of the international song contest “Eurovision-2017” will begin at 22:00. TSN.ia will conduct a text broadcast.

Catchy original Italian or Portuguese. Who will win the Eurovision song contest in 2017? The vote

Also, look online the final show will live on Eurovision.ua the channel’s website UA:First, Eurovision.tv and on the screens of the official fan zone on Khreshchatyk – the Eurovision Village and the EuroClub.