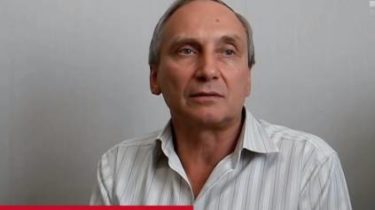 Representatives of illegal armed formations in the Donbass agreed to include the captured scientist Igor Kozlovsky in the final lists of prisoners for exchange.

About this on his page in Facebook wrote a representative of Ukraine in the Tripartite contact group (TCG), Vice-speaker of the Verkhovna Rada Irina Gerashchenko.

“The other side finally promised, including in the format of the TAG that the negotiation of the final lists will include I. Kozlovsky,” said she.

However, according to Gerashchenko, the separatists, despite the verification of prisoners in Ukrainian prisons accomplices, continue to pull with the exchange, coming up with flimsy reasons for this. Because of this, it is impossible to agree on a final list of prisoners and the date of their release.

“The OSCE has recognized that the verification was according to all international standards and norms of humanitarian law, and ensuring confidentiality. We insisted on the participation in the meeting of the Ombudsman V. Lutkovska, which confirmed compliance with all these standards. We insisted today to draw a line under verification and move on to agree the final list and the date of release. The other side, by contrast, continues to vamping and requires clarification still on some names,” – wrote Gerashchenko.

We will remind, in January 2016 scientist Igor Kozlovsky captured terrorists from “DNR” on false charges, accused of sabotage in favor of Ukraine. Kept prisoner a year and almost four months in the basement, the Tribunal militants decided: to plant the Ukrainian on two years and eight months.