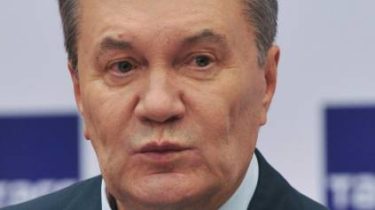 The escape of Viktor Yanukovych was in charge of the guard of Russian President Vladimir Putin General of the army of the Russian Federation.

This was stated by the senior Prosecutor of the GPU Alexey Donskoy in his interview to “Novaya Gazeta”.

“At about 13.00 on Kiev, he flew from Anapa to guards at a military airfield near Simferopol, which at the time was rented by the Russian black sea fleet. In Crimea, on the basis of the fleet, was in the night from 23 to 24 February,” he said.

According to don, after that Yanukovych warship of the black sea fleet went to the territory of the Russian Federation.

“We have evidence against the Russian army General, who led the operation to move Yanukovych from the Donetsk region in Krasnodar Krai and from there to the Crimea. Installed and the identity of the person from the protection of the President of Russia. These two men oversaw a group of performers, while coordinating their actions with the head of Yanukovych’s Kobzar, and a security officer Biernacki,” added the Prosecutor.

Suspicion Yanukovych has declared the public Prosecutor of Ukraine Yury Lutsenko during videotapes former head of state. At the same time Lutsenko has declared that will give the documents to lawyers who were present at the hearing and properly to Rostov. Note that the main argument of the prosecution was a letter from Yanukovych to Putin asking for military support.