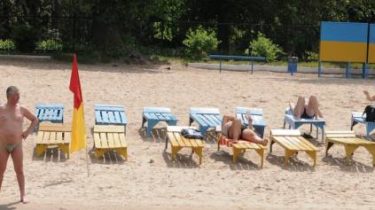 In Kiev the beginning of the summer season in the capital will open the 11 beaches. This was reported by the press service of Kyiv city state administration.

So, in the Dnieper area will earn beaches “Youth”, “Venice”, “Predmetna Slobidka”, “Golden”, “Children”, “rainbow”, “Telbin” and “Central” and in the Obolon district – the “Palm” and “Pushcha-Voditsa”. Desnyanskiy district will open a beachfront Whirlpool. At all beaches it is planned to obtain health certificates.

On the beaches of “Child”, “Gold” and “Pushcha-Vodytsia” will be available five seats amphibians use which will help specially trained staff.

In addition, the first three beaches -” Children “,” Gold “and” Pushcha Voditsa “- will participate in the international program “Blue flag”, in which presenting the award for water, which meets the highest quality standards and is suitable for safe swimming.

We will remind, earlier it was reported that in Kiev will re-open one of the oldest Cycling tracks in Europe under the open sky.