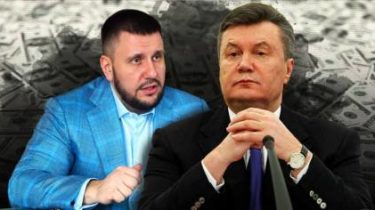 On 24 may, the leaders of the Prosecutor General of Ukraine and the Ministry of interior reported the major anti-corruption operation on detention of senior officials of the tax since the presidency of Viktor Yanukovych. The amount of losses to the Ukrainian budget figures, estimated at 96 million.

TSN.ia gathered in one material all that is known in this case.

Employees of the GPU and the interior Ministry has exposed the so-called scheme of “Yanukovych-Klimenko”, during which it carried out the control over all conversion centers in the country, with the result that taxes “paid” in the budgets of state officials – the highest, the Minister of income and fees, his patrons, and local tax authorities. The Prosecutor’s office said that they have “irrefutable proof” that former heads of 15 regional offices of the Ministry of income and charges follow the instructions of Viktor Yanukovych and ex-the Minister Oleksandr Klymenko, which organized and provided the illegal activities of the so-called “tax areas”.

At the briefing, which held at the capital airport “Borispol”, the chief military Prosecutor of Ukraine Anatoly Matios and interior Minister Arsen Avakov said that the operation was prepared during the year, and the detentions started from 6 a.m., may 24. 1700 fighters FSL and 500 military prosecutors simultaneously carried 454 searches in 15 areas under this tax scheme.

According to Matios, contributed to the investigation and dismissed the Chairman of the State fiscal service Roman Nasirov. He gave the police important indications, which are allowed to detain former ex-heads of tax inspections.

Only in the case was arrested 25 defendants. Some of them, from the Dnieper, Kharkov and Odessa on the helicopters brought in the Kiev airport “Borispol”. Accompanied by convoys took them to the GPU, where they will be handed a notification of suspicion and where will send immediately to the court.

The Minister stressed that the investigation does not allow to publish the full number of persons from the list of suspects, but a few of the names and positions in the business know.

In particular, one of them – the former head of the Luhansk regional state administration and head of tax service of Area of times of Yanukovych Alexander Antipov. During his detention he had found a bag with a round missing currency – 3.8 million dollars.

At the airport “Borispol” detained the former Deputy head of the Ministry of revenues in Dnipropetrovsk region Gennady Kazaka. The former official was on his way to the plane, when he was in the hands of security forces.

Detained was the former head of tax inspection of Podolsk in Kiev Yuriy Kravchenko. He had time to talk to reporters and said that “any guilt not feeling”.