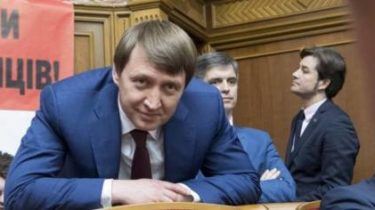 The Minister of agrarian policy and food Taras Kutovoy resigned because of disagreement with the government’s land reform.

About it reports “Ukrainian truth” with reference to sources in the faction “BPP” and the presidential Administration.

At the same time, sources in the Cabinet say that Kutova had a strained relationship with Prime Minister Vladimir Groisman, who imposed on him the first Deputy Maxim Martyniuk.

The Prime Minister Groisman on his page in Facebook said that he was sorry because of the decision Kutova and thanked him for his work on the development and reform of the agricultural sector.

According to the head of the government, a new candidate for the post of Minister of agrarian policy will be proposed after consultation with the coalition, “but the strategic line for the development of the domestic agricultural sector will definitely continue.”

We will remind, 14 APR 2016 Kutovoy was appointed Minister of agriculture. From 2012 to 2014 he was the first Deputy head of the parliamentary Committee on agrarian policy and land relations, from 2014 to 2016, the Chairman of the same Committee.

Deputy of the Verkhovna Rada of the seventh and eighth convocations, elected in single-mandate electoral district №151 in Poltava region.