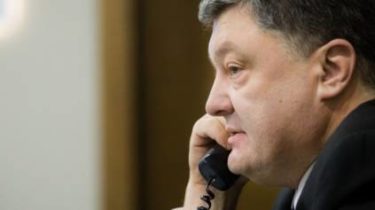 It is reported by the presidential Administration of Ukraine.

Poroshenko congratulated Him on his election victory in France, and expressed confidence that Ukraine has received in his person a true ally in the restoration of the sovereignty and territorial integrity.

The two leaders discussed the situation in the Donbass and Poroshenko, in particular, brought the facts of violation of Minsk agreements by Russia and supported militias.

Poroshenko and macron called for the intensification of work in the “channel format”. They also coordinated their positions before the meeting of the leaders of the countries “the Big Seven” in Italy.

The Ukrainian head of state invited the President of France to visit Ukraine at a convenient time.

We will remind, in France confirmed that President Emmanuel macron will meet with Russian President Vladimir Putin on may 29 to mark the opening of the Versailles exhibition dedicated to the 300th anniversary of the visit of Peter to France.