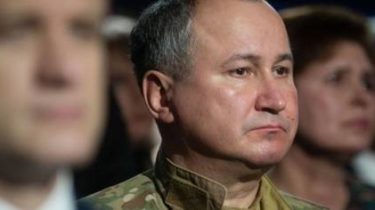 Ukraine is ready to exchange 200 people in the Ukrainian hostages held by Russia-controlled militants in the Donbas. This was announced by the head of the security Service of Ukraine Vasyl Hrytsak, UNIAN reports.

“We are prepared to exchange more than 200 people who expressed such a desire (to return to the territory ORDO – Ed.)”, – said hrycak.

Also according to him, it is difficult to carry out the process of exchange of prisoners, as it politicizes.

We replied in Russian: “He’s in captivity. Up we won’t let him”

In addition, Hrytsak said that a lot of people who are serving sentences in prisons or for anti-terrorist activities, refused to return to “L/DNR” in the exchange process.

“This is an extremely sensitive issue. The more it is politicized Moscow, and she politicized, the more difficult it became to change… We had a very good work together with the Ombudsman to establish one of the persons said to share and side. We have a lot of people who are serving sentences for committing anti-Ukrainian activities, terrorist activities in places of deprivation of liberty in Ukraine. So when it came to the and said that the Donetsk side is through the mechanism of pardon by the President of Ukraine to exchange you for Ukrainian soldiers – a lot of people refused to return to “L/DNR”. And it is very significant, since they said they’d rather do, how they are defined, but not coming back,” said Hrytsak.

The head of the SBU said that the Russian side is the recruitment of persons, who under the guise of so-called soldiers ‘ mothers, which they are not, make a variety of provocative actions to put pressure on the Ukrainian authorities.

We will remind, earlier Vice-the speaker of the Verkhovna Rada Iryna Gerashchenko said that representatives of illegal armed formations in the Donbass agreed to include the captured scientist Igor Kozlovsky in the final lists of prisoners for exchange.