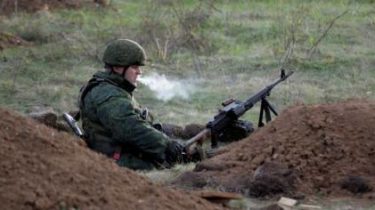 In the Donbas the militants “LNR” for unknown reasons, fired on a group of civilians.

“May 24 soldier 4 separate motorized rifle brigade (Alchevsk) 2 AK firearms fired at a group of civilians”, – stated in the message.

As a result of the shelling, two civilians were wounded.

The fighters covered with fire district school in Marinka during class

In turn, the mercenary could not explain the reason of his actions and was sent for examination to a medical facility.

According to intelligence, to mental disorders at fighters results in a significant increase in physical stress on the staff due to understaffed units, because there is a “massive early termination of the Russian military contract for service”.

Earlier, the militants shelled Avdiivka from “Gradov” and damaged homes. Victims among the local people there.