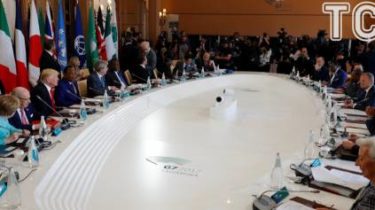 Leaders “the Big seven” does not rule out additional sanctions against Russia for its aggressive actions in Ukraine.

This is stated in the final Declaration of the G7 summit.

“We recall that the duration of the sanctions against Russia are clearly tied to the performance of its obligations under the Minsk agreements and its respect for the sovereignty of Ukraine”, – the document says.

In turn, the G7 added that they are ready to lift sanctions against Russia if the country will fulfill its obligations.

“Sanctions can be rolled back if Russia will fulfill its obligations. However, we also are ready to take additional measures to increase the financial losses of Russia if its actions are required” – said the leaders of the group of seven.

It is noted that the solution to the crisis in Ukraine requires the implementation of the Minsk agreements by all parties.

In addition, the G7 reaffirmed its commitment to a policy of non-recognition of the annexation of Crimea and also the full support of the independence, territorial integrity and sovereignty of Ukraine.

Recall, German Chancellor Angela Merkel met on the sidelines of the G7 summit in Italy a bilateral meeting with US President Donald trump, during which touched upon the issue of Ukraine.