Support Euromaidan and the prediction of the war in the Donbass. What Brzezinski talked about Ukraine 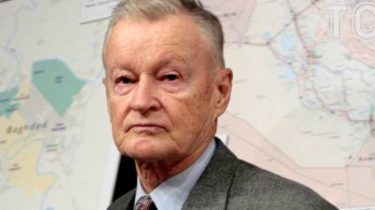 American political scientist and statesman Zbigniew Brzezinski, who died on the 90 th year of life, actively supported Ukraine and its European course, also predicted the capture of the territory of Donbass Russian military.

During the Revolution of Dignity, he expressed admiration for the Ukrainians in the video message to the protesters stressed that they make an important case from the point of view of history.

“I salute the heroic people of the Maidan. What you do is vital from the point of view of history. This is something that accentuates your national identity, the contents of your independence and faith in victory. Now you must transform it into an effective political tool,” – said to “Gromadsky”, the American political scientist.

Putin is not ready for war with the West, therefore, boasts of nuclear weapons – Brzezinski

In January 2015 he was convinced that the desire to be part of Europe and at the same time to maintain “friendly relations with Russia” unites all Ukrainians. That is why he urged to establish a Committee of national unity.

“You have to show not only Ukrainians, but also the world that desire independence, determination to be a free European country and at the same time, to be on friendly terms with Russia – is what unites all of you. And the people who are your leaders symbolically represent this historic commitment. This is why you need to create a Committee of national unity. You must determine the specific leadership,” he said.

After Russia’s takeover of Crimea Brzezinski predicted that Russian President Vladimir Putin may be preparing for the deployment of troops on the territory of Eastern regions of Ukraine.

“The Crimean scenario may be the beginning of what (Putin – Ed.) plans. In some Eastern regions of Ukraine where there live Russian-speaking Ukrainians, many of whom sympathetic to Moscow can begin, initiated by the Moscow riots. Then the Russian troops”, – he said.

Brzezinski urged the EU and the US to assist Ukraine and stressed that the redistribution of Russia’s borders in Europe on the basis of ethnic Russians in certain areas will create a dangerous precedent for the whole world.

In his opinion, if the West had not imposed sanctions against Russia, Ukraine would lose its independence.

“If there were no sanctions, Russia, unfortunately, would have a free hand to liquidate the independence of Ukraine”, – said Brzezinski.

Brzezinski: Putin’s main objective – to intimidate Europe and ruin it

At the same time a well-known expert argued that there are “very large”, the probability that after Ukraine Russia’s President Vladimir Putin would take over other countries. Also, according to Brzezinski, the worsening situation in the Donbass in 2015 was not an accident.

“Of course, is not a spontaneous escalation, and provoked from the outside. Perhaps the source of impatience is that the situation is not as Putin would like. Can’t repeat what arrived in the Crimea, that is, to obtain control of a large part of the country without firing a shot”, – assured the expert.

At the meeting of the Senate Committee on armed United States Brzezinski urged to provide Ukraine with a weapon.

“In Europe, Putin is playing with fire. He is arming and financing local insurgents. One of his goals is to destabilize Ukraine. Thus Russia encroaches on the sovereignty and independence of Ukraine and, in fact, has already managed to do it. At the same time, NATO and especially the US should give Ukraine to provide weapons for protection,” he noted.