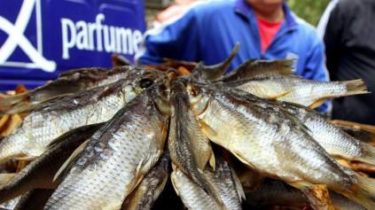 In Kiev from 18: 00 on may 29, temporarily banned the sale of dried fish industrial production due to fatal poisoning.

About it reports a press-service of Rospotrebsoyuz.

Citizens who already bought the fish, strongly recommend to refrain from eating before clarification of circumstances.

In particular, in Kiev was one fatal case of botulism two cases of botulism that ate dried fish industrial production, purchased in the trading network of the city.

From-for poisonings killed a citizen born in 1976, which, on 24 may, according to his wife, ate dried not patronage bream.

In the other two cases of botulism, also affected the disease associated with the consumption of dried roach and carp production.

It is noted that this fish was produced by the enterprise, which is located in Svitlovodsk in Kirovohrad region.

Victims it purchased in the hypermarket “Caravan” in the Akademika Glushkova Avenue, 13-b, and the supermarket “Megamarket” vul. Antonovich, 50.

Currently, measures for localization and liquidation are carried out jointly with the Department for the protection of economic security of the National police of Ukraine in Kiev.

We will remind, in Prosecutor’s office spoke about the possible poisoning in a kindergarten in Dnepropetrovsk. Novomoskovsk, Dnipropetrovsk oblast to the local hospital were nine children, all of them — pupils of preschool educational institution. Besides them were hospitalized, three adults (staff of the same kindergarten). All — suspicion on an infectious disease, reported the press service of the Prosecutor of Dnipropetrovsk region.