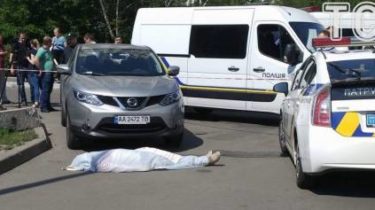 In Kiev, Poznyaky could be killed the former acting General Director of the enterprise “Ukrspirt” Viktor Pankov.

This is not on camera saying the staff of the Kiev police, the correspondent of TSN Dmitry Furdak.

It is now known that the man was killed in a car window, which is now wanted. The sound of gunfire witnesses heard at 8:20 and called the police and medics. The victim was carried out resuscitation, but was pronounced dead.

Now there are investigators and law enforcement officers. The body of the killed have not yet picked up.

As previously reported, on the morning of 30 may on the street Michael Grishko in Kiev unknown “Audi” red fired several shots at the man and drove away in the direction of prospect Grigorenko. According to preliminary data, from a shot in the back of the man died. Now on the scene working investigative team, the police introduced the plan “Interception”.

“If you’d seen how long this crawls MS*tion coach. And how long was the doctor out of this machine. It’s a shock. Going and checking the pulse, she was pronounced dead and almost started to get up. All I could squeeze out: “Do something”. It a few minutes ago was alive…” – he wrote on his page in Facebook.