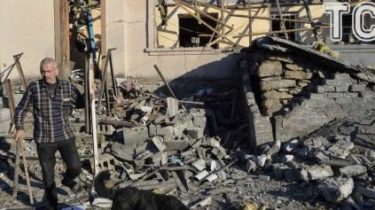 On Tuesday evening, may 30, the militants “DNR” fired at residential areas of the Town, killing three civilians were injured.

This was announced by the head of the Donetsk regional military-civil administration Pavlo zhebrivskyi and the chief of police Donetsk oblast Vyacheslav Abroskin.

The Shelling Of Krasnohorivka. What lies behind the powerful attack on town near Donetsk

The shelling occurred at around 19.40. One of the mines exploded close to a bus stop where there were civilians. Three people – two men and a woman – were injured and were hospitalized. One of the injured is in serious condition.

One shell flew into the yard of a private house, causing damaged Windows, walls and roof of the building.

We will remind, on may 13, militants fired at residential quarters of the private sector in the plant. In the streets Sapronova the shell hit the courtyard of a house. Killed three women and one man. Another man in serious condition was hospitalized.