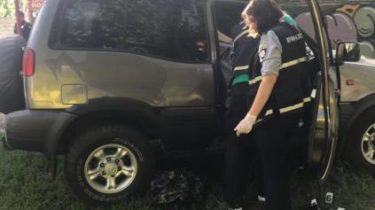 Militiamen consider as the basic version of the shooting in Kiev, the Patriotic position of the spouses of ex-volunteers, who were attacked by the killer at the hem.

It is reported by the Department of communication of the police of Kiev in Facebook.

It is reported that the assailant wanted to kill ex-soldier of the regiment “Kiev” Aminu Okoawo and her husband, former head of the peacekeeping battalion behalf of Dzhokhar Dudayev Adam Osmayev. The shootout injured two men: the killer and Osman.

They were taken to the hospital, which provides medical care. At the place of work investigative team who establish circumstances of incident and collected evidence.

Upon attempt at murder of two and more persons began criminal proceedings according to article 15 of part 2 of article 115 of the Criminal code of Ukraine.

The Glock and the Ukrainian passport of a killer: police said the details of the attack on the ex-volunteers of the ATO

We will remind that earlier the police said details of the shooting. Thus, the attacker under the guise of a foreign journalist suck up to wives, he allegedly wanted to interview.