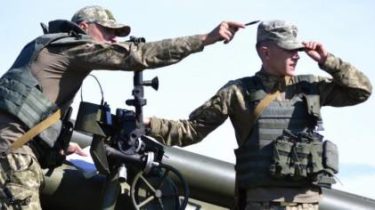 In the Crimean district of the Ukrainian army have built a strong point near Bakhmutskaya track that a mile farther from the previous one.

The journalist reports about it TCH Eugene Zvecanska.

Still, this area was a gray area, and the enemy was put here mini, including prohibited by the Geneva conventions. Was found military and the residues from shells of the system “Buk”. We collected several bags of explosive objects.

The city Council has been classed fighters dobrobatov military ATO

The position was occupied without loss. It is more profitable, say the military. Position located closer to the 31-th checkpoint, which the military were forced to leave in January 2015 to the occupied town Groove. Besides, now the army have the ability to control the track and save more lives after all, before the militants the area sweep.