In Brovary near Kiev broke out a large-scale warehouses with fuel, rose into the sky black column of smoke 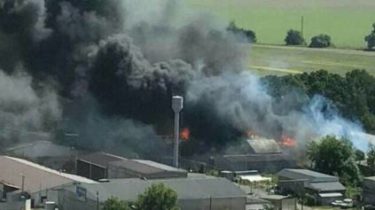 In Brovary, near Kiev, a massive fire occurred in the warehouses of the fuel.

“A massive fire near Kiev in Brovary near MREO burn warehouses with fuel,” – said in the message.

According to preliminary data, the fire area is a few hundred squares.

As noted, on the fire place there is a strong smoke – a column of smoke visible even from some parts of Kiev.

We will remind, in Kiev in the night of Monday, June 5, explosion. A powerful shock wave smashed Windows and glass on several floors. The incident killed a man, another man – woman in serious condition was taken to intensive care.