Below the Groove broke out a powerful battle with militants: children preparing for evacuation 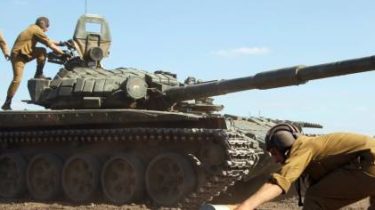 Lugansk militants provoked the battle near the village of Zhelobok.

Currently, the area of the Groove, the military situation is dynamic. Information about the injured will be known after the collision.

93 military brigade reported that the militants increased the intensity of the fire since the beginning of this week.

In turn, at the headquarters of ATO stated seven wounded and one dead military near the Crimean Luhansk region. According to the acting Chairman of the civil-military administration of the village of Novotoshkivske village and the Groove of the Popasnyansky area Dmitry Kondratyev, in the settlement of Novotoshkovskoye the damaged conduit, the fragments of the massacred civilian homes, the issue of evacuation of children.

“According to available information the enemy is actively accumulates reserves and undertake other activities that could be construed as preparations for an attack by terrorist forces. In addition, the increased activity diversionno-prospecting groups of the opponent”, – stated in the message of staff.

Earlier, the militants fired at the checkpoint “Marinka” from grenade launchers. The terrorists were hit by military fire from the occupied village of Aleksandrovka.