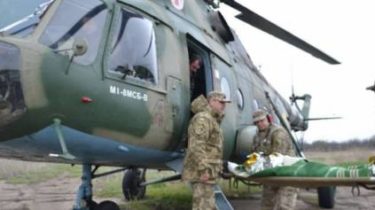 Seven wounded soldiers in fierce battles under the Groove that night was taken to the Dnieper. Three of them are now in a military hospital, four were brought to the regional hospital Mechnikov, stated in the story TSN.16:45.

The heaviest among them is 26-year-old Igor. He has severe internal bleeding and multiple shrapnel wounds. The doctors all night trying to stabilize the soldier’s condition that they will withstand the operation. Fight for his life, several teams of surgeons. “Injuries are extremely complicated, completely broke the lower abdomen. Wounds to the chest, hip, bullet wound in the shoulder, wounded face. Extremely severe”, – says the chief doctor of the regional hospital. Mechnikov Sergey Ryzhenko.