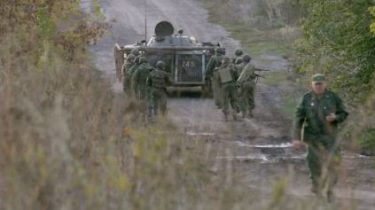 Lugansk militants suffered considerable losses among the personnel, moving to the attack near the village of Zhelobok.

About it Tsna reported in the 93rd separate mechanized brigade of the Ukrainian Armed forces, which the soldiers fought off the attack of the enemy.

According to the commander of the brigade, in close proximity to the escalation of the Groove began to grow Monday, June 5. The terrorists used 120-millimetre mortars. The next day the positions of Ukrainian military earned cannon artillery. Wednesday, June 7, the militants of the terrorist organization “LNR” shelled the area near the village Novotoshkovskoye, as well as the Crimean. After a massive shelling of Luhansk, the militants went on the offensive out of the Groove, which comes with their positions.

Now, as reported in the 93rd brigade, the enemy suffered heavy losses. Set the destruction of 11 fighters. While the bodies of their minions terrorists were left on the battlefield. It is known that in the occupied Kadyivka Monday not doing the plan of operations, healing of the separatists.